What price for immortality

Despite the hype, Brazilian super-talent Gabriel Medina is a long way from greatness.

But, as he tells Surfing Life, he’s willing to do whatever it takes. Story: In a few minutes Gabriel Medina will make his debut at the Quiksilver Pro, Gold Coast but right now he’s trying to compose himself. Surrounded by hundreds of fans, he stands alone on the rocks at Snapper Beach, head bowed, eyes closed and board cradled to his chest. Gabriel, a devout Christian, is praying.

When he paddles out in a moment’s time it will be with the weight of the surfing world on his shoulders. At just 18, he’s already been tagged the future of the sport by none other than Kelly Slater. While his Brazilian passport means ensures he will drag the burden of his country’s failure to win a surfing world title wherever he goes. But he’s not shying away from the challenge. “I want a world title as soon as possible. That’s my goal,” he tells me later. He stands this way for over a minute. A group of kids creep tentatively towards him, one with his hat outstretched for an autograph, but Gabriel makes them wait. He needs his time alone with the lord right now. On paper, he looks every bit the contender. At 12 he stuck his first aerial. At 15 he became the youngest surfer in history to win an open professional contest, at 16 the under 18-world champion before, at 17, he became the youngest surfer in more than 20 years to qualify for the World Tour. But he was only getting started. In just his second event on tour, Gabriel won the Quiksilver Pro, France, beating Kelly Slater on his way to victory. Two events later he did it again, this time claiming the Rip Curl Search, San Francisco, again beating Kelly.

“He’s really setting the bar and he’ll be setting the bar for the next 10 or 20 years,” said the 11-time world champion of the young Brazilian after the loss.But with the success came the pressure. “It changed a lot. It felt like I had a big responsibility now,” he says. He returned to Brazil a national celebrity appearing on all the country’s major television networks and the hype machine went into overdrive. If he was feeling apprehensive he should have been. While he’d had some big wins, all of them had come in beach break conditions perfectly suited to his world-class aerial game. How he’d perform in the heaving blue water barrels of Tahiti, Hawaii or Fiji was anyone’s guess. While here at Snapper, against a field of veterans on what the goofyfooter admits is his greatest weakness – his backside – he stands a chance of being cruelly exposed. Things aren’t about to start well for the rookie. It’s a far more relaxed Gabriel Medina that greets me outside his apartment on the Gold Coast a few days later. He’s flanked by two of Brazil’s other young stars, Jadson Andre and Miguel Pupo – a trio you’ll rarely find separate during an event. Standing alongside Gabriel it’s hard not to be impressed by his physique; tall with slabs of muscle spread across his sinewy limbs, it is the body of an athlete and a departure from the pint-sized pros of yesteryear.

His performance at the event a few days ago was a poor one. Bad wave selection and a rickety backside attack capped the kind of display that could cripple a rookie’s confidence but he’s not kicking cans of black beans yet. “I didn’t come early for this contest and Snapper is a wave I haven’t surfed much. Again, that made me nervous. I felt all the other guys were ahead of me,” he says matter-of-factly. His response offers a snapshot of what might be Gabriel’s biggest weapon in his quest for a world title. Ask his father, and he’ll tell you his son has had the strange capacity to mentally compartmentalize things from a young age, a character trait that will serve him no end in the disconcerting chance game that professional surfing can so often descend into.

“Things don’t affect me at all. I can do what I have to do, then the next day comes and I don’t think too much about it,” says Gabriel. But arriving at the Quiksilver Pro underdone was a big mistake and one he knows better than to have made. As understudy to the uber-professional Brazilian great and world number five, Adriano de Souza (who has been known to show up a month early to prepare for an event), Gabriel knows the importance of preparation better than most. When he won in San Francisco, it was after arriving ten days early for the event giving him time to acclimatize to the freezing water and learn the waves. While France too was a place he knew well, having competed there with success in the past. He won’t make the same mistake again this year. In a few days he leaves for Fiji where he will tune up for the Volcom Fiji Pro in June and he can’t wait to get to test himself at Tahiti’s infamous Teahupoo.

“I have the life that I always dreamed about. I can travel the world and surf good waves and compete and bring my family with me,” he says. It’s a potent mix of motivation, mental grit and talent propelling Gabriel toward a world title but is it enough to break the great Brazilian world title hoodoo?As recently as five years ago it wouldn’t have mattered how talented or motivated Gabriel was, he was Brazilian and that alone was enough to ensure he wouldn’t win a championship. With the country’s surf industry still fledgling and international brands yet to come to the party, financial support for Brazilian surfers was minimal. Some still managed to claw their way onto the World Tour but once there they were at a huge disadvantage.

“Before, these guys had a lot more things to worry about: getting to a place, where are we going to stay, they didn’t have trainers, people with them, the right boards, people filming them,” acknowledges Gabriel. Today, with the Brazilian economy one of the fastest growing in the world and participation in surfing exploding, the money has finally arrived and young Brazilian surfers are storming the tour. There’s seven in the men’s ranks this year, including former Rookie of the Year, Jadson Andre and world number five Adriano de Souza, while the women’s charge is being led by dual world title runner up, Silvana Lima. It’s just a matter of time now, says Gabriel. “In the future we will have a Brazilian world champ because we have more opportunity and more sponsors,” he says.Once on tour, the Brazilians represent a unique crew. Where surfers from other nationalities might travel in groups of two, including a personal trainers or confidant, the Brazilians are a family. They all watch one another’s heats and support each other in any way they can, whether it’s heat strategy, boards or a couch to sleep on for the less fiscally supported.

“We help each other but of course, in the heat we are aggressive and do everything to win but we get back to the beach and we’re the same,” he says, adding, “The others are more separate.”

In the pre-dawn light, Gabriel, Jadson and Miguel Pupo wait in their car outside 7/11. They’re stocking up on meat pies before we head for a freesurf at the famous Stradbroke Island. “It’s the best, my favourite wave,” says an excited Jadson. I follow as they make hasty time on the deserted streets, blowing out the speed limit several times on their way to the wave. The sun has risen by the time we hit the beach and it’s hot. It will be two hours until the other big name pros and their film crews arrive and the three Brazilians don’t waste a second, catching wave after wave in the relentless short period swell. As a peak approaches, Gabriel sprints into position. He looks at the take off spot then back over his shoulder at a ramp section down the line, then back at the take off spot. It’s the kind of waves he’s grown up in and he makes the take off expertly, putting himself on the steepest part of the lump and shooting down the face. His rangy figure curled low through the descent, he hits the bottom and unfurls into a highline trim before another contraction gets him really flying. The ramp he’s eyed off down the line is swinging in at him at a radical angle but a bit of foam crumbles from the top of the wave blocking his run. He checks his line, coming around the foam with buried a bottom turn and… he launches into a huge, vertically rotated double-grab air reverse, traveling at least five meters sideways in the air. He can’t ride out of it but still it’s a new extreme of height, rotation and speed to anything I’ve seen. The Brazilians surf for five and a half hours straight, in which time Gabriel catches at least 60 waves. When Mick Fanning, Bede Durbidge, the Hobgoods and several other big names arrive for a casual free surf, the Brazilians take a deserted bank up the beach and run a mock-heat (Miguel wins). By the end of the day, they’ve all got heat stroke and Miguel’s prodigiously talented 11-year-old brother, Sammy will fall violently ill that night with a fever. This is the price, says Gabriel.“I have to improve everything and I train for that.”If it seems a big sacrifice for someone so young, he points out that it’s a small price to pay for immortality.

“For me to be remembered as the first Brazilian to be world champion, that is something that makes me feel good about it. It’s never going to be forgotten, it will be in surfing history forever.” 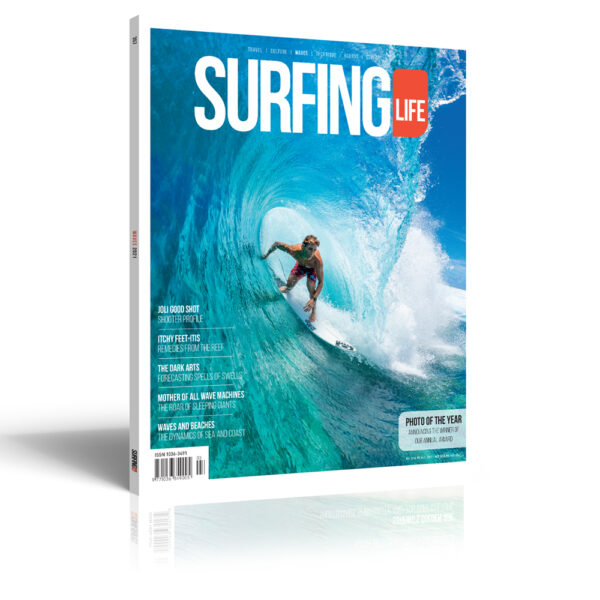