The New Kid on the Aussie Air Comp Block.

What the hell is The Bersih Puntorama, and why would we be writing about it as a magazine that has long removed itself from the reporting of competitions? We are still heavily involved with the Who’s Who of the world tour … they are of course the best surfers in the world, but when it comes to reporting on events, we normally leave that for the ever-hungry online platforms that need to put out something every day. But this competition is different. We may be a little biased in our review of this event, mainly because we were involved with the creation of it. We were approached by the crew at Bersih who had been running an online version for the last two years. They asked us to come onboard and assist them in taking the event to the next level… and that’s when the magic started to happen. Ideas were bounced around, concepts were created and issues with current comp surfing were addressed. All of this, to put together what we believed to be the best competition ever. Well we think it is anyway. We wanted to create an aerial based competition for anyone to enter, i.e., drop a sick clip on Instagram, tag appropriately, and boom, you were entered. The finalists would be selected from the clips entered and invited to join us for a live event held in Coffs Harbour. The goal was to answer all the things we collectively thought were wrong with surfing competitions, things that we thought could be better, complaints we had heard countless times online and in person, plus come up with new ideas because they might be cool.

Watch the Highlight Video Below 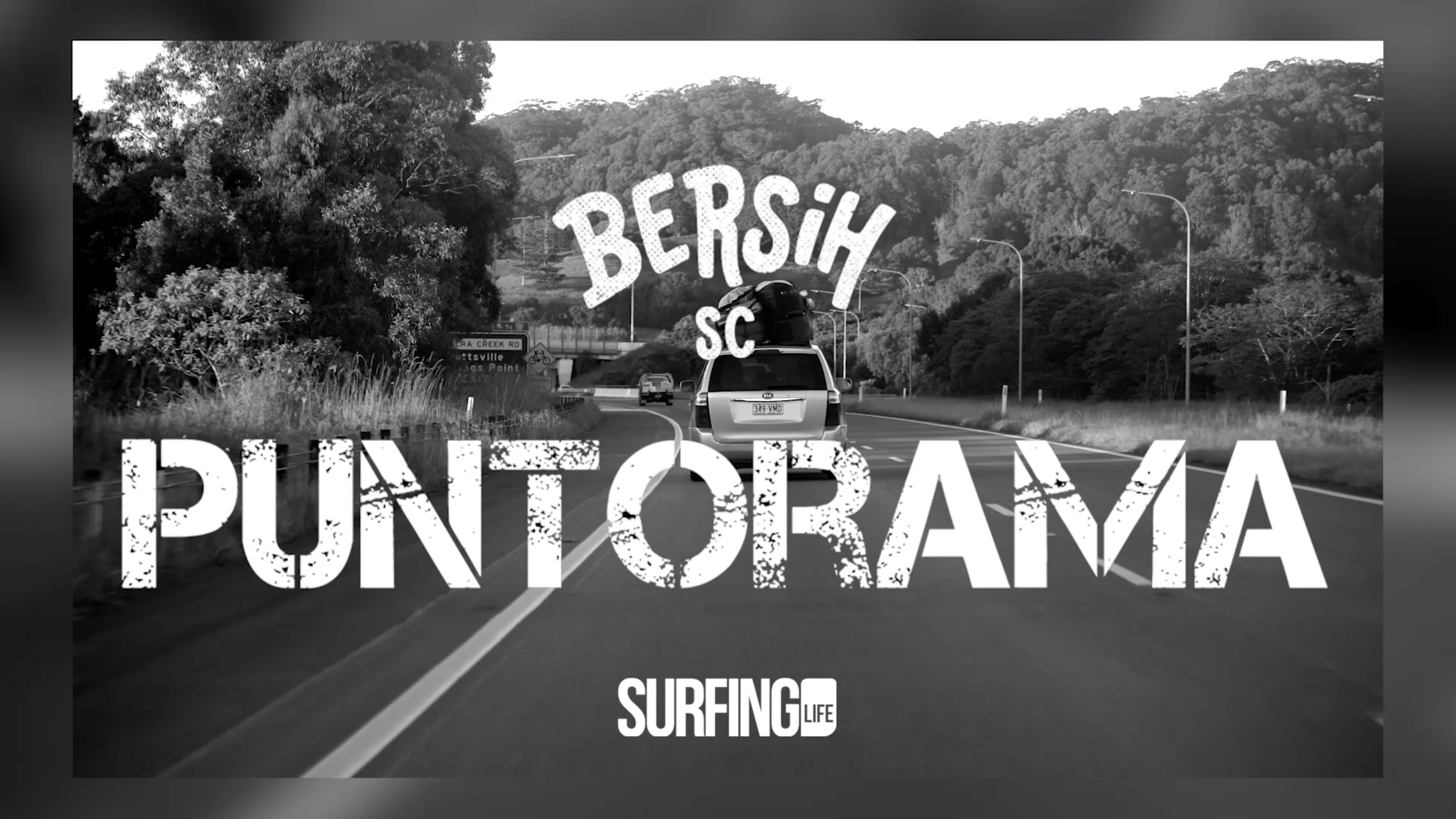 We know it’s quite a list of NO’s and we were pretty happy about that. The main reason is we think there’s a lot of problems with competition surfing. Although for the world tour we know it’s actually as good as it can be at this stage, but for a single specialty event, we knew we could do it better. How it was run

The event has a two-day waiting period, because it can be run in three hours flat. That gave us a two-day, big window to find the right conditions. It also gave us the opportunity to run it on the best tide, swell and wind. It could be run within an hours drive of the central base (which this year was Coffs) so we weren’t locked into a particular area for the event as it was completely mobile. We know this isn’t new, but rarely ever done at an event of this size.

Once the day and location was decided upon, we set up the comp site, got all the cameras set up and sent out the lads to go nuts. There were no heats, or priority; the competitors simply went out and surfed for three hours. Some didn’t paddle out straight away, some came in early; they could surf the three hours any way they wanted to. Every wave was shot from four different angles and cameras to make sure all the waves were captured. After the three hours were finished, we packed up and got ready for the party that night. 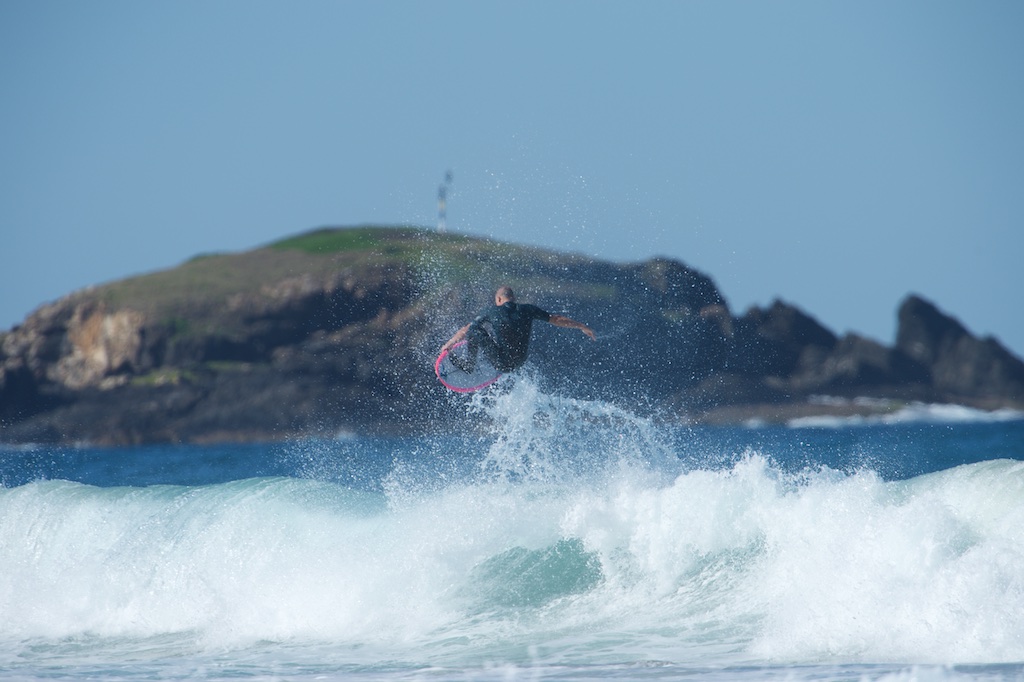 How it went down

After picking the lads up the day before and grabbing dinner at the famous Rainbow Bay Surf Club (best view on the coast) we decided to head down early the next day in convoy. Surfers, photographers, organisers and of course the lads from Young Henrys with a ute full of beer. Why head off so early when the event didn’t start until the next day? Well, we knew there was swell in the water down at Coffs, and the crew were a bunch of frothers, so head off early we did. It was a great move. We got to Coffs, pulled out all the boards and cameras, and got some amazing content. In fact, you may have even seen the clip that went viral on Social Media of Letty and Reef trying to kill each other as they went head to head in the air (the Moments in the front of the mag tells the full story of that encounter).

After a quick surf (three hours), check-in at Wyndham Resorts/Ramada, who looked after us for the accommodation (amazing place to stay in Coffs), we headed down to the beach for the Welcome to Country and smoking ceremony with the local Gumbaynggirr people, traditional custodians of the the Coffs region. This was an amazing experience and everyone involved really appreciated the opportunity to be welcomed to country, something most of the crew had never experienced. It was then time for the welcome BBQ and a couple of chilly Young Henrys. While at the dinner, we asked the surfers their thoughts on location and time frame for the next day. It was obvious it was going to be the day for the event as the swell was dropping and the day after was going to be a non-event. A decision was made and we headed back to the resort to hit the spa, job done, ready for Day Two. 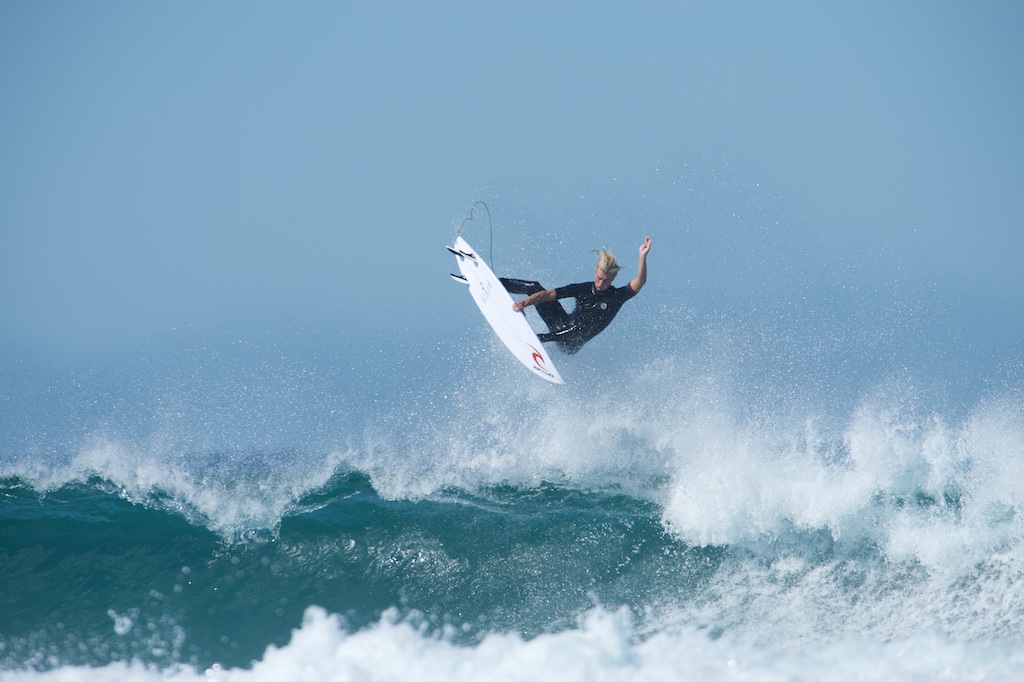 We headed down reasonably early for a spot check and it was decided to get things underway within the hour. One of the nicest things about the location was we could set up on the beach with all the 4WDs and send the lads out straight in front of us. To be honest, for a two-day event window, you couldn’t have asked for better conditions for an air comp. It was shoulder to head high, with plenty of ramps. All the competitors got ready and ran out right when the hooter sounded. Everyone that is except for Mitch Parkinson. Mitch casually hung at the car, slowly got ready and about half an hour after the start of the heat/event he paddled out. This is the beauty of an event like this. It’s great for slow starters and it doesn’t affect quick starters. Mitch paddled out and got himself in the picture straight away. The rest of the lineup went along the lines of Reef Heazlewood, Letty Mortensen, Cooper Chapman, Jamie Krups, Nathan Cook, Joe Van Dijk and of course, Mitch.

After three hours of mayhem in the air, the shooters’ eyes getting blurry, the event was run, but not done. We headed back for a much needed feed and then started sorting the footage. After all the clips were collated, everyone headed to the Hoey Moey to judge the event — well, to get the surfers to judge the event. This was another one of the innovations we brought to this event, something that removes bias and favouritism, i.e., judging is done by the surfers themselves. We figured no one knows what they are doing better than they do, so let’s let them decide.

After going through all the completed airs, the surfers’ heads were spinning. In three hours a lot of air is made by punters of this calibre. We then sent them all to separate areas to decide on their anonymous votes. The votes were tallied for best single air, best style, and the major prize of best overall surfer of the event. Thanks to World Surfaris for giving us a ten-day boat trip to the Maldives on the Maavahi as the major prize. It wasn’t easy for the surfers to judge, but they all agreed it was the best way to do it. With this style of judging it also meant that the celebration and climax happened all at the same time at the end with everyone still there, a perfect way to to finish what was a perfect first event of its kind.

The winners were as follows: Best Single Air – Reef Heazlewood; Best Style – Joe Van Dijk; Best Overall Performance and major prize winner – Reef Heazlewood. As you can tell with Reef winning two of the three categories he was on song and a worthy winner. Special mention does need to go to Mitch and Letty as they were also extremely close to taking home the salty bacon with only one vote difference deciding the winner. Why is this event so good for technique?

We wanted to run this story in the Technique issue because we believe events like this do indeed help develop a surfer’s technique. Mainly it’s because they aren’t forced into pressure situations of going out and grinding out a score in 30 minutes and just taking waves that get them three to the beach. They can spend time selecting the best waves, choosing the best sections to hit, and making the right move. There are a lot of things that need to be coached into the QS grinders, but if you’re not a comp guy or girl, yet you’d love to win something and think your surfing is good enough, then this is the event for you. We will run this event again next year and if you want to enter, simply follow Bersih Puntorama on Insta or keep reading our mag. We will let you know when the next round of entries is open.

Everyone involved, from the organisers to the surfers to the shooters, said this was one of, if not the best comp they’d ever been in or gone to. In the end, it was really just a classic East Coast road trip with cameras, a fricken huge prize and an incredible vibe. We couldn’t have hoped for a better result for an inaugural live event and we’d like to thank all of the sponsors and surfers for making it as good as it could be.