This article first appeared in Surfing Life #356 – CULTURE ’21 (starting on p. 18). To read more like this, buy the issue or subscribe.

We’re down to the penultimate events for the WSL tours, meaning that there is a lot on the line for those surfers vying for a spot in the Top 5 finals series at Lowers.

It’s also a crucial time for fantasy players, with Mentawai trips and bragging rights up for grabs among serious players and trash-talking clubhouses alike.

With only a few hours to go until the J-Bay event kicks off, we thought we’d run our eye over the fantasy landscape and help you lock in a fantasy team that will have you bathing in fantasy glory.

Choosing a team for J-Bay

As one of the most famous breaks in the world, there has been plenty written about Jeffreys Bay. For those who want details, Surfline’s Mechanics of J-Bay is pretty comprehensive, with swell, wind and bathymetry all analysed. Alternatively, the WSL gives a detailed look at the wave via local legend Shaun Tomson’s insights and Mick Fanning’s Go Pro footage. Maybe you’d prefer to listen to Kelly, Conner and Wade describe it, or even just watch a whole bunch of 10-point rides from J-Bay events past. No matter how you like to research, the trainspotters out there have plenty of options for this event.

For those with less time or concern for minutiae, the quick version goes like this: J-Bay is a long, right-hand point-break with conditions that require excellent speed management and adaptability when reading the wave. Long, drawn out turns that fluidly transitions into the next are like ambrosia for the judging panel. Barrels are definitely an option, but they can squeeze on surfers quickly, depending on the swell angle and the section of the point that they’re surfing. Goofy footers have traditionally struggled for success out here, but Gabe and Italo made a break-through for the final last time it was run (2019). Massive alley-oops don’t score too badly.

Lastly, you can’t talk about J-Bay and NOT mention the whole shark thing. There’s the 2015 final that saw Mick’s infamous slap and Julian’s heroic paddle towards the incident. You may recall a few pausing of heats to watch live footage of tentative competitors on jetskis while sharks patrolled the event site. Or maybe you can relate to the constant, sphincter-tightening sense of shark risk associated with surfing South Africa. So, yeah. It doesn’t impact the quality of waves, but it can sure as hell change the outcome of the event.

After a few disappointing events surf-wise, the WSL forecast for J-Bay paints a promising picture regarding the chance of quality surf:

WEDNESDAY 13th: 5-7’+ faces AM building to 6-8’+ faces by day’s end. Light side/offshore wind early trends offshore for the afternoon. SWELL/SURF: Reinforcing, mid to longer period SW to SSW swell builds in through the afternoon. The morning looks close to where we ended on Tuesday, with more size building for the second half of the day.
WIND: Light WNW wind in the morning trends moderate offshore W/WSW by the later morning and afternoon.

THURSDAY 14th: 8-12’+ faces all day. Moderate devil wind (WNW) early trends offshore by mid morning. SWELL/SURF: Solid SSW swell builds in with pumping surf all day. Look for surf in the well overhead to double overhead range, with some larger sets not out of the question. Stay tuned.
WIND: Stronger wind than the previous days likely. Potential for early devil wind from the NW/WNW but offshores should settle in through mid morning at breezy levels. Offshore wind continues through the afternoon as well.

FRIDAY 15th: 8-12’+ faces early ease to 8-10′ faces by day’s end. Light offshore wind early may trend to light+ onshores by the afternoon. SWELL/SURF: Solid SSW swell continues, and the morning should be similar in size to Thursday afternoon. A gradual decreasing trend is expected through the second half of the day.
WIND: Offshore wind is currently expected in the early to mid morning, trending light/variable around mid day. Light to moderate onshore E wind is expected for the afternoon.

John John Florence – He missed the 2019 event with a knee injury. Does that sound familiar, because he’s out again for the same reasons? How many world titles have his knees cost the Hawaiian wunderkind?

Gabriel Medina – another world champion out with knee issues. He’s out of the finals anyway, so he may as well rest it properly, recover fully, and focus on 2023.

Yago Dora – Yago has been announced as the only official replacement surfer at this stage, taking John’s spot.

Kelly Slater / Seth Moniz / Barron Mamiya – these three surfers are back in the draw after injury withdrawals and, for all intents and purposes, will be expected to don the rashie come Round 1 at the Bay.

Luke Thompson – this young, South African upstart has been making a name for himself over the past few weeks. After earning a Bronze at the ISA U18s in June, Luke was thrown among the wolves at the CS event at Ballito this week. He survived the baptism of fire with aplomb, beating the likes of Jordy Smith, Jordan Lawler, Kei Kobayashi, and Vasco Ribeiro (twice), and gaining a highly respectable 9th place.

Joshe Faulkner – a J-Bay local, Joshe is ranked 46th (before Ballito updates) on his debut crack at the CS. The young goofy-footer has had a few victories in QS1000 and junior events, but is yet to taste major success on the big stage.

Tia Blanco – continuing to milk her success in the failed Ultimate Surfer series, Tia takes another shot at the exclusive post-cut tour. Good on her; I’d do exactly the same.

Jordy Smith – a reliable performer here (ignore his 25th, when he surfed injured), with several quarters-or-better results in the last few years. While he hasn’t returned to the dominance of his 2010/11 wins, he has solid metrics across the board.

Kelly Slater – while many of his better stats appeared earlier in his career, Kelly boasts the highest win percentage across the history of the event. He’s surfed 17 times, won 4 times, and won 72.3% of his heats in that time. Even since 2013, Kelly has still won 57.9% of his J-Bay heats.

Matthew McGillivray – why not? He’s defied just about every doubt placed upon him this year, he’s surfing well, and he knows the wave. Seems like a sensible pick.

Griffin Colapinto – Mr hot-and-cold for 2022 has gotten his post-win-17th out of the way and will look to turn his incredible rail work into some J-Bay silverware.

Callum Robson – The sleeper of the year, or maybe just Morgan Cibilic for 2022? Either way, this wave will be a great canvas on which to continue painting his rookie masterpiece.

Flick ’em – be wary of these surfers

Jadson Andre / Miguel Pupo – these Brazilian goofy-footers have had several J-Bay campaigns over the years (7 & 5 events, respectively), but claim the dubious honour of the two lowest win percentages for the event.

Matthew McGillivray – did we just suggest him above? Sure, that whole argument made sense, right? The thing is, Matt’s data for these conditions isn’t great. It’s a pretty limited data set though, so make your own call.

Joshe Faulkner – sure, it’s easy to pick on the rookie, but he’s a goofy-footer whose seed will see him match up against Filipe as often as possible. He’ll need every ounce of local knowledge to overcome that handicap.

Kolohe Andino – Sure, he could blow up here; he certainly has the surfing to go far. I just get the sense that, this year, especially after seeing Griffin’s arrival as the new Golden (State) Boy of Californian surfing, Kolohe is starting to accept the idea that he’ll never win a CT event.

If, like us, you like to dig deeper into the metrics regarding your potential fantasy team, check out our full article at fantasysurfsessions.com and triangulate your inner-nerd picks to your heart’s content.

Here’s the thing about data-driven fantasy selections: they almost always guarantee you a ‘safe’ score, i.e., they usually stop you from sucking completely. What they don’t earn you is a winning score, a score that is only gained through defying the popular choices with an against-the odds Sleeper. Here are some options that we have our eyes on:

Top Tier – Kanoa. I’ve been juicing Kanoa for a darkhorse result all year, and I’ve been wrong. A few times. His data is actually quite good for this event, and I can’t see him making many teams. Are you willing to take the punt?

Mid Tier – Nat Young. I could wax lyrical about stats or whatever, but this is a gut feeling. I’ve been pretty hard on my fellow right-foot-forward surfers this event, but I like Nat’s chances to cream those nooners and win a few heats.

Low Tier – Seth Moniz is back and, because of his rank and lack of results, his price has dropped. Could be the perfect sleeper for this reeling right-hander.

As usual, we’ll be offering prizes for this event; the Bells fantasy champion wins a 12-month subscription to fuel.tv, as well as 12 months access to Holistica‘s awesome surf training programs. The loser gets a prize too; 12 months of digital stoke through a Surfing Life subscription, just to take the sting away.

All you need to do is make sure your team is saved before the event starts. 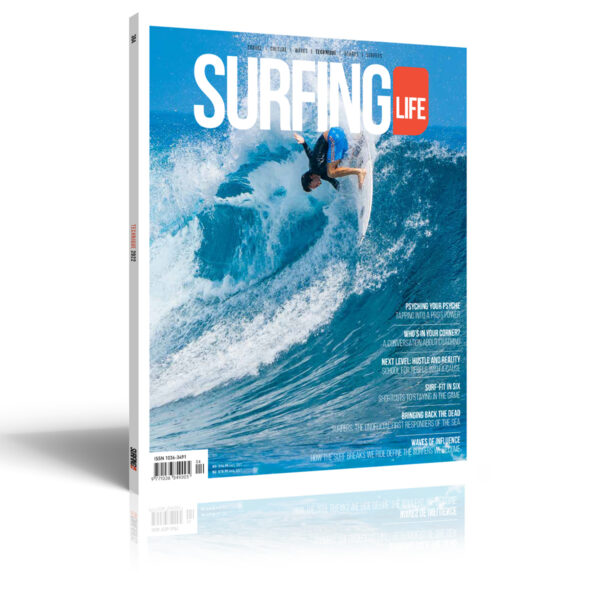