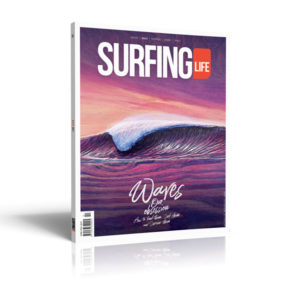 This article first appeared in Surfing Life #337 WAVES ’17 (starting on p. 50). To read more like this, buy the issue or subscribe.

Please note, the following is an abridged version of the original article.

Words by Stephen Shearer
Photos by as credited

Wind blowing over water is called a fetch, and it’s our basic driver when it comes to swell generation. A fetch creates wind waves in a sea state. As these wind waves move away from the wind source, they start to organise and move according to the energy contained within them. At this point these waves are now called swell trains. Swell trains can travel vast distances – especially those with high energy content, measured by the distance between the swells in the swell train; i.e. the swell period, or interval.

Long-period swells have enormous energy moving deep within the ocean and do all kinds of weird and wonderful things upon reaching coastlines and offshore reefs, like bend around at crazy angles (refraction) and magnify to many times their ocean height!

But, we’re racing ahead of ourselves, and depending on where you are surfing, period may not even be that important.

For those coastlines exposed to mostly close-range sources – like the east coast of Australia, where Coral Sea tradewind swells and low-period Tasman Sea low pressure systems dominate swell – swell direction is far more important in forecasting good surf… which is not something you’ll hear Magic Seaweed admit to. There tends to be a fetish among the online forecasters for swell period on coastlines exposed to groundswell, but more about swell period and its importance later.

Let’s not bog our rails on specifics or indulge in any romantic fantasies that things were better when we only had the synoptic chart in the newspaper to forecast with – even if that did thin out crowds.

We’ll focus on old-school knowledge, but access it with modern internet tools, which it publishes – mostly, and bestly – for free. No need to get sucker punched into paying for expensive premium content on a forecasting website if you can develop or hone the skills on your own. Getting off the internet spoon-fed forecasting cycle also puts you in the driver’s seat when it comes to ducking and weaving around crowds who are all accessing the same information.