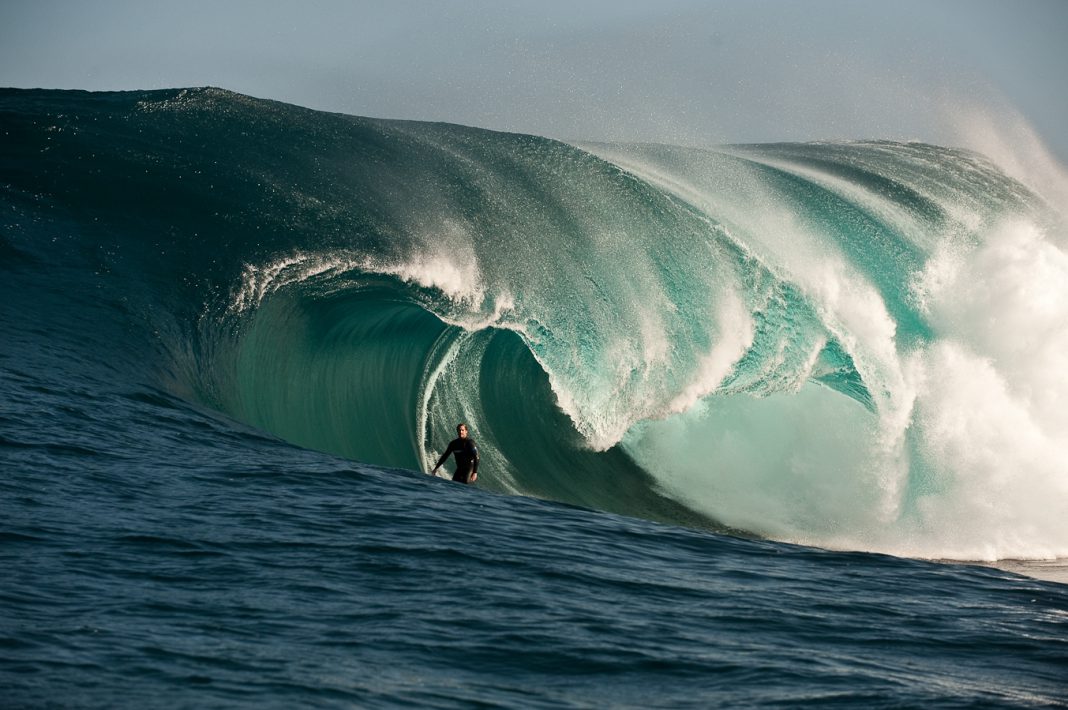 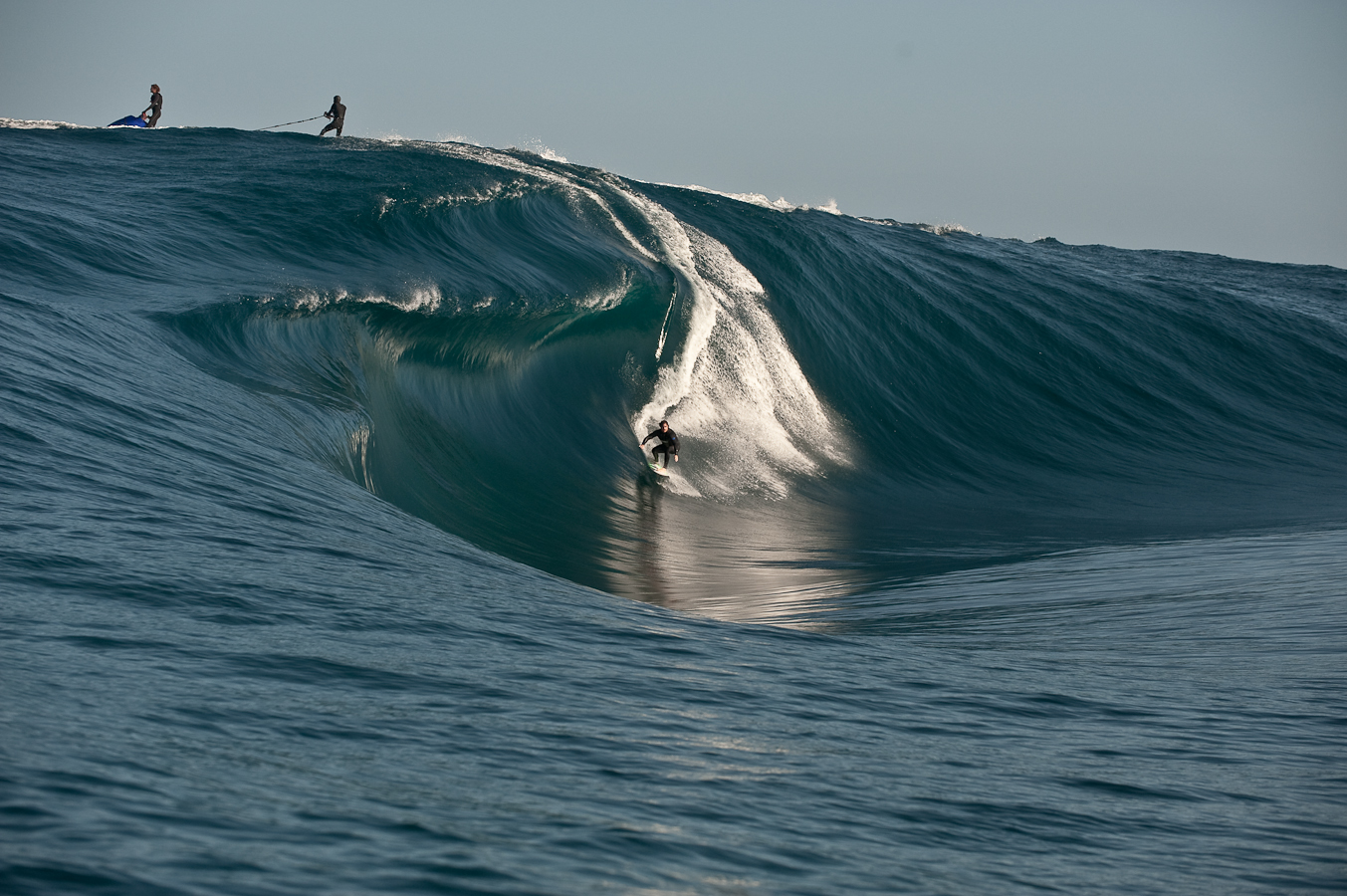 So, that was a pretty friggin’ crazy weekend.

Ha. To be honest, on Friday I was thinking that this swell was the dud of the century. Then Saturday came. We woke up in the morning and went out early. It was good, but nothing huge. And it was packed, too. There were, like, 17 skis in the channel, eight or nine towing, maybe more. And then half the people left around lunchtime. I was about to leave too, because I thought it was getting smaller, but then at about one o’clock it just started pumping – the biggest I’d ever seen it. I don’t know what happened, maybe the tide got better or something, but it started puuuumpin’. There were bombs coming through the whole time, there were waves capping out the back, and that’s something I’ve never seen out there before. It was huuge. A lot of closeouts too.

I saw the first bits of footage this morning, and there were sooo many wipeouts.

Did you cop any bad ones?

Yeah yeah, I got a two-wave hold down and a closeout. I got pretty smashed on ‘em.

You say that so casually.

Haha, well, what can you do about it, right?

I’ve heard it called that you surfed the biggest wave at The Right, ever.

Well it was definitely the biggest Right I’ve ever seen, and everybody’s saying that the one I caught out there was the biggest ever ridden. But I still don’t know. I’m sure there’s some maniac who’s gone out by himself and caught a bigger one.

Can you kinda, walk us through the wave itself? What happened?

It’s actually pretty funny. There were so many big sets coming through the skis were everywhere and it was just chaos out there, and my mate towed into the wave before that one. Then Jarryd turns around and looks at me with the cheekiest grin on his face and says mate, don’t even look at it, you don’t even wanna know what’s coming. And I’m like, ah fuck, alright. And then we start goin’ into it and I sorta take a glance and think fuck, it’s pretty big. But I start going down and there’s a little step thing in it, and I’m like, ok don’t fall off here. And I made that, then I was sorta just cruisin’ along. To be honest I can’t even remember it after that – I guess I was just in the zone.

It seems like there’s so much force it’s impossible to even keep a line.

Oh, yeah, it’s hard. It’s really hard. But I’ve surfed it so many times now it’s sorta second nature on the wave. You’re going down and you’re thinking, alright, I know what I have to do and I know how I’m going to get outta this wave. And then all you’ve gotta do is hope it holds up and barrels and it doesn’t close out.

And on this one, it didn’t!

Nope. Actually, I got pretty smashed in the channel. That wave almost closed out between the rock and the actual reef, so it was a pretty hectic wave. My mate Jezza was getting sucked up over the falls on it too, because he had wiped out on the wave before. All you can see of him in the photos is a yellow board and then this black dot in the wave (you can see that image at the end of the video above). That was him. And then my mate Damo was out the back, sitting on the ski, and he saw Jezza’s head pop out – he said all he saw was Jezza take two really big breaths then go straight over the falls. Do you ever hit the reef, or is it too deep usually?

I hit the reef the other day actually, but it’s usually pretty deep. I have to equalise and stuff. You’re more worried about getting smashed though. The wave seriously just smashes you. It’s like being hit by a car, and I’m not just saying that. Whenever I’m out there I’m not worried about the hold down, it’s all about the smashing. It can break your arm or legs or whatever, just from the jets of water hitting you.

I know it’s hard to estimate, but how big do you reckon The Right was?

100 foot? Haha, nah, I’m joking. I reckon that big one was about 40-foot maybe? It was pretty solid. But to be honest I didn’t know how big it was when it was behind me. I was like, ah yeah that was pretty sick, then I got back out the channel and everyone was just shaking their head going what the fuck dude. I was like, what do you mean? And they were like, that was the biggest wave to come through here! I’m so glad I wasn’t looking behind me when I pulled in. But I saw the footage and I was sorta hoping for it to be bigger, to be honest. Ha!

When you were in it, did it feel bigger than any wave you’ve caught?

Is it weird getting all the big news stations calling you for interviews and that?

Out of the whole month, what was the best session?

It’s hard to say because they’re all such different waves. Shippies you’ve got the step and it’s a totally different thing, The Right is the biggest, gnarliest barrel ever and then Cow is just huge. It’s all different, and it’s hard to say one’s better than the other.

Is The Right the scariest?

Yeah. I think so. Cow is pretty scary too when it’s windy and 50 foot, just because it’s so big. You’re going down the biggest wall, and, imagine a 50-footer lip landing on top of you…. That’s pretty hectic.

Was anyone injured at The Right that day?

Chopper got stitches in his face from his board hitting him. Six stitches, I think, on his face. Not ideal. But I think other than the normal shenanigans like people losing cameras and people going over the falls, nothing else. Do you find all the skis and people everywhere dangerous?

It is, yeah, it is. But also it means you’ve got more tow teams. If someone gets smashed there’s someone there to pick ‘em up, even if their driver is doing something else like getting the board. It’s good to help each other out and whatnot. But it’s not always crowded, it’s only like that when the media hypes up the swell, because everyone hops on a plane.

A lot of the time, like when I was surfing Shippies, there are only two tow teams out. And then when I surf Cow it’s me and Jarryd alone a lot of the time.

Well, do you think this swell lived up to its hype?

The Right did, that’s for sure. Cow could have been heaps bigger I reckon. August of last year Cow was bigger. Even three or four weeks ago Cow was bigger and better.

Ah, yeah, that’d be nice, wouldn’t it!? Anyways, I go half with Jarryd in it all. We always say to each other that if either of us win money we’ll go halves, because you know, he’s the one that’s getting you the waves in the first place. It’s 50% your tow partner. If he doesn’t put you into a good wave, you’re not going to get a good wave. We usually do five waves on, five waves off each session. Unless someone’s having a really good session, then it goes a bit longer.

Haha! Yeah, I’m still so psyched on it all. After swells like this I get really humbled by everything. It’s such a weird feeling afterwards, you kinda don’t even want to talk or anything, in your own mind you’re just going ah, I need rest! Gimme rest.

And you’re back at work (we spoke while he was on a break from his job as an electrician). Onya Mick.