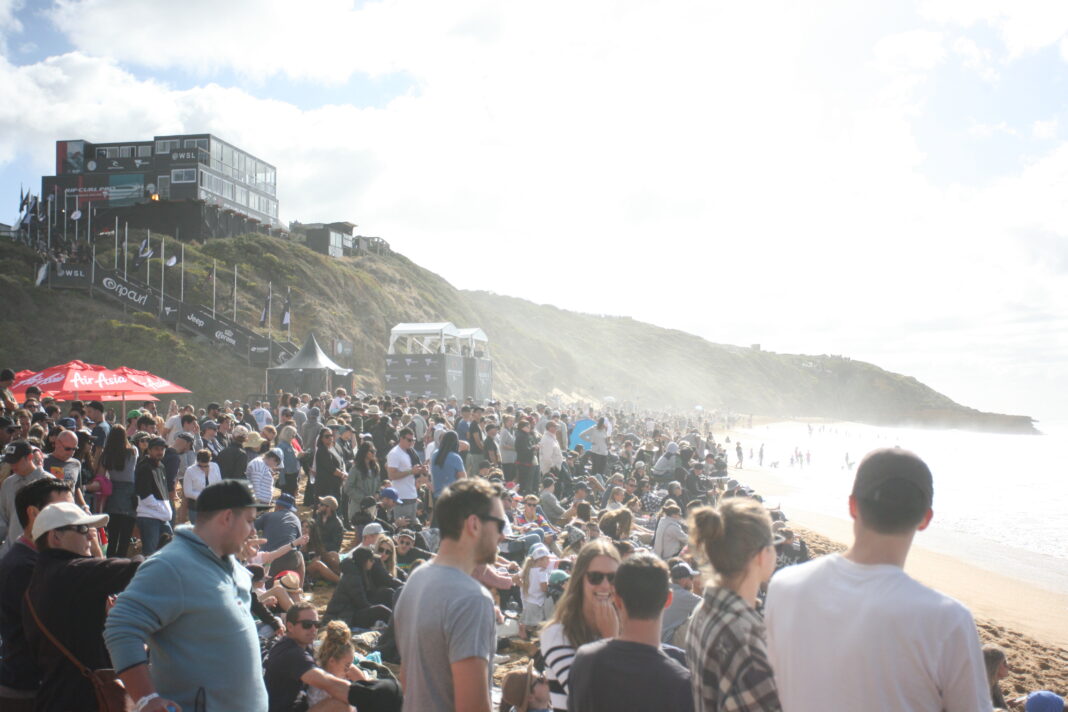 Hells Bells; we’re back at the bowl.After covid breaks and travel restrictions, Bells Beach hosts a CT tour event for the first time since Mick’s retirement (and Italo’s debut event win) in 2018.

What’s changed? Well, Italo has since won a world title (2019) as well as an Olympic Gold Medal.

Mick retired, found love, had a child, appeared at Newcastle, saved a bunch of Tweed locals during the floods, and is now making a welcome – if somewhat unnecessary – wildcard return to his favourite event.

The tour has changed a little since 2018, too: we are two events away from a newly-introduced mid-season cut, which will feed into a refined (less surfers) back-half of the year, the world title is now decided in a one-off, 5-surfer finals event, the men’s and women’s tours are now mirrored across all events and destinations, a Challenger Series will see top regional QS surfers and CT rejects battling it out for a 2023 spot across several events, Kelly found a way to win again, wildcards and replacements seem to be dominating, and Gabriel Medina and Caroline Marks have taken mental health leave.

Are we all caught up? Great! Let’s look at our fantasy options for Bells.

How would you like to get a sense of the Bells break via a drone fly-over presented by Coastalwatch and narrated by Nick Carroll? Or how about a Bells overview from Kelly Slater?

If that’s not enough, then I’m not sure what else I can possibly tell you. It’s a right-hand, partially reef-bottom point break that traditionally favours deeper/heavy water surfers who can draw out their bottom turns, time their connections, and hold their rails. Recent years have also shown that there is a place in at Bells for progression, depending on the conditions and surfer’s ability to make it fit naturally into the overall wave. Think Filipe’s 10 or John’s 9.97 in 2017.

It’s worth noting that surfers with success at QS events such as Sunset or Haleiwa are generally well-suited to the break. This surely bodes well for the dazzling replacement-cum-rookie, Barron.

As usual, I’ll hand over to the doyen of surf history and knowledge, Matt Warshaw for his take on the wave:

Right-breaking Australian reef wave located three miles southwest of Torquay, Victoria. Facing the chilly and powerful Southern Ocean, and flanked by limestone cliffs, Bells Beach—named after the Bell farming family—has for decades been a venerated surf break. Bells is at its best from March to October, as Southern Ocean storms frequently produce six- to eight-foot surf, with waves sometimes topping 15 feet. Rain and wind are common at this time of year.

The wave at Bells is sloping and wide-based, strong but rarely hollow; deep tuberides at Bells are rare. The break consists of three main sections: 1) Little Rincon, located to the south, needs a higher tide and a sub-six-foot swell. 2) Outside Bells, the main break, is a long, fast, evenly formed wall that begins to take form when the surf is about six foot. 3) The Bowl is the steep final section of the Outside Bells wave. Centerside, located 150 yards outside of Little Rincon, is an inconsistent right that eventually closes out. Southside, located further around the Bells Beach headland, is a left-breaking wave that spills into a nearby bay. Winkipop, the reef just east of Bells, is a spectacularly fast and hollow right-breaking wave, and generally regarded as superior to Bells proper. (Four-time world champion Mark Richards once called Bells “a dud; the most overrated wave in the world.”)

While we’re still waiting for the official forecast to drop, modelling suggests that there could be small-but-clean conditions (4′) for the opening day, followed by a bump in swell on Monday (6-8′). Winds look variable at this stage, but we will check again closer to the event.

In case you’ve been immune to the WSL media onslaught, Mick Fanning is returning to Bells as a sponsor wildcard. In other news, Bronte Macaulay (AUS) will continue surfing as the WSL Injury Replacement for Caroline Marks (USA), who has withdrawn from the Rip Curl Pro Bells Beach due to medical reasons.

Three-time WSL Champion Gabriel Medina (BRA) has withdrawn from the Rip Curl Pro Bells Beach and will be replaced by Barron Mamiya (HAW), who is currently sitting as World No. 2.

Yago Dora (BRA) continues his recovery from his injury ahead of the season and will be replaced by WSL Injury Replacement, Matthew McGillivray (ZAF). Carlos Munoz (CRI) and Liam O’Brien (AUS) sustained injuries at Pipeline and continue their recoveries. They will be replaced by World No. 6 Caio Ibelli (BRA) and Mikey Wright (AUS), respectively. This will mark Wright’s return to the CT after announcing an indefinite break from professional surfing following last year’s Corona Open Mexico.

The two remaining wildcard spots for women and men will be decided by the local trials event. The trials are scheduled for Thursday, April 7 at Bells beach, and a total of 20 men and 20 women will fight for one spot in each division.

*It’s worth noting that Kelly Slater has tested positive to Covid-19, meaning his appearance at Bells is in jeopardy. Watch his place carefully.

Also, if you want to totally geek out on possible R3 match-ups and scenarios, you can go to fantasy surf bracket and customise it to match the draw.

Jordy Smith – the reason Mick has the second-highest AHS as Bells is because Jordy’s is higher. He’s a past winner and is well-placed across every relevant metric for the event. The only thing working against him is a slight lack of 2022 form; he’s 11th for both season AHS and win %.

John John Florence – best win % for this event, bar none. His chances of a win increase as the forecast wave height grows, so watch the swell.

Frederico Morais – Fredyy has two events here and two 5th-place finishes. Solid win % and AHS for the event (we admit that 2 events isn’t a significant point of reference). Could be a decent sleeper.

Nat Young – While Nat’s data is older even than Mick’s (Nat last surfed here in 2017), he’s proven himself to be a consistent performer, with a final, semi and quarter in his 5 attempts. He’s never finished lower than 13th, and he is top-10 for all important event metrics.

Kanoa Igarashi – Yellow jersey, yes. Bells maestro, no. Kanoa has had 4 Bells campaigns, finishing 13th, 25th, 25th, 9th. That said, 2022 is looking like a big one for Kanoa, so he could be set to break his Bells hoodoo.

Mick Fanning – Sure, we recommended him just a moment ago, but life is complex; keep up. In case you missed it, Mick tanked at his last ‘comeback’ in Newcastle. Yes, his data is great here, but it’s ageing (like him), plus he has no form, no real motivation, and the tour is moving on from when he used to dominate. In short, 2022 Mick is not the safe bet that he was in 2018.

Jadson Andre – Jaddy has surfed here 5 times since 2013, and he has finished 25th on 3 of those occasions. He is among the bottom 8 surfers for this event’s AHS in the same period.

Kolohe Andino – the Cali kid (no, not Griff) has plenty of Bells events under his belt. The problem is: he’s never made it to the quarters. Not once. He has a 1-in-3 heat win average, and his AHS places him at 15th in the current field.

Mikey Wright – to be fair, Mikey finished with a 17th in his one Bells appearance back in 2019, which isn’t awful. A lot has happened since then, though. He re-injured himself after 3 lacklustre events, in his first ‘proper’ season, returned in 2021, finished 32nd, ‘quit’ the tour immediately afterwards by saying that he was over it. It doesn’t scream ‘motivated to win’ to me. He also has an event AHS of 9.78, which is the second-lowest behind fellow Bells one-timer Sammy Pupo. (That said, Mikey surfed his best when he was OFF tour, i.e. 2018, so maybe he’ll do well…)

Here’s the thing about data-driven fantasy selections: they almost always guarantee you a safe score. What they don’t earn you is a winning score, a score that is only gained through defying the popular choices with an against-the odds Sleeper. Here are 4 options that we have our eyes on:

Top Tier – I say it every event, but a top-seeded Sleeper is a pretty stupid idea. It’s my stupid idea, though, so I guess I’ll run with it. I’m calling Filipe Toledo this year. He’ll get a few picks, but nothing like John, Jordy or Italo. Probably won’t be as popular as Slater, either. The thing is, his Bells data is good; he claims the 4th-best average place AND 4th-best AHS for the event.

Mid Tier – I normally suggest one surfer here, but since this section will make up a big part of your team, I’ll go for two. It’s got nothing to do with the fact that naming two surfers doubles my chances of saying, ‘I suggested him for a Sleeper pick’ if I somehow manage to get it right. Ahem. First, I’m picking Nat Young. I’m banking on people having a short memory on how well he’s done out here. He also has sentimental favourites Kelly and Owen in his heat, so people may avoid him. I’ll throw Barron Mamiya in my Sleeper group as well. He’s seeded 12th, so it’s almost cheating, but the WSL ‘fan picks’ tool has him at only 27% for R1, which is the lowest of all the red jerseys. Sunset winners have had a rich history of Bells success, and Barron could surprise out here.

Low Tier – Jackson Baker is one heat win outside the mid-season cut (equal 23rd), but he’s still seeded quite poorly. Today, while many of the tour practised their Bells game, Jacko won the Mark Richards Pro in Newcastle, a QS5000 event that wrapped up the Australian leg of qualifying. He’s the first Novacastrian to ever do it, achieving what Luke Egan, Matt Hoy, Ryan Callinan and countless others couldn’t. He’ll be riding high coming into Bells.

As usual, we’ll be offering prizes for this event; the Bells fantasy champion wins a 12-month subscription to fuel.tv, as well as 12 months access to Holistica‘s awesome surf training programs. The loser gets a prize too; 12 months of digital stoke through a Surfing Life subscription, just to take the sting away.

Best of all, we have a new prize starting at Bells:

If you’re part of a Boardrider’s Club, we have a special prize for the 2 Australian Events; we’ve partnered with LiveHeats to offer 6 free LiveHeats comps (valued at $850), as a one-off prize for the top-performing Boardrider Club across the Australian leg of the men’s CT in April.

All you need to do to be in the running for the free LiveHeats credits is:

Check out the prize details and fine print here:

Talk to your club, sign them up, and enjoy the best contest scoring platform for free.