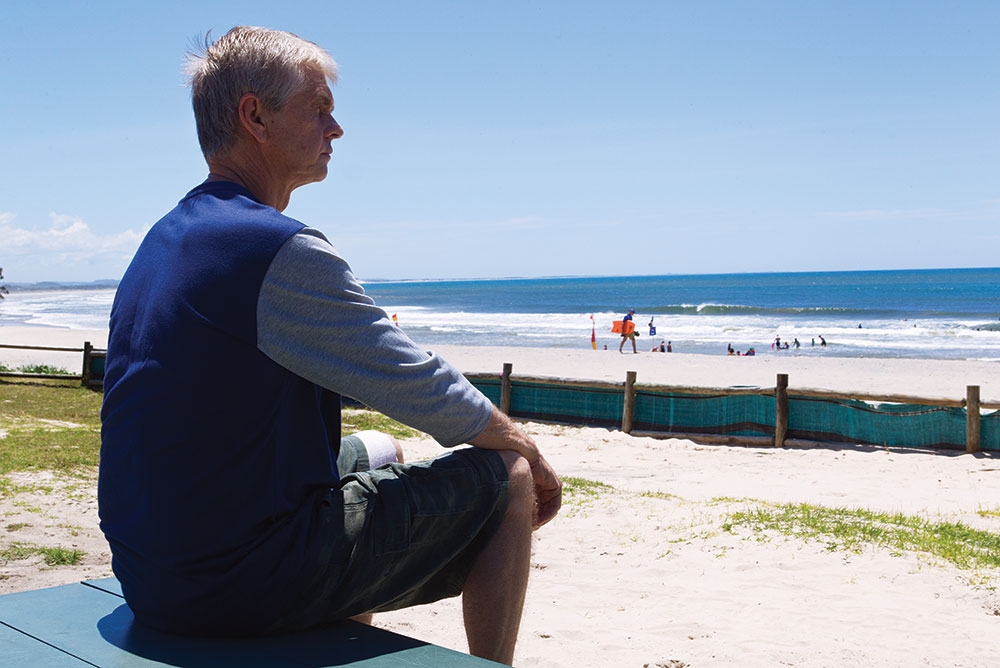 By Nick Carroll and Mimi LaMontagne One of the first things SL notices about Craig is the nasty bite marks up his left arm. Half the arm is just indented scar tissue. His hand was nearly shredded into bits, but has been successfully sewn back together – it’s visibly puffy and it looks a bit like a voodoo doll. But he goes to hand rehab every day and he can use it almost normally.

He’s quick to show us his leg wounds, which means he has to pull down his pants, saying, “I don’t have an arse anymore!” Like his arm, his left leg and bum cheek are about half there.

Craig lives with his mum in a three-bedroom house in a nice homely part of Evans Head. When SL arrives, he’s wearing his Bite Club t-shirt and cutting up herbs, making the tuna salad that he has every day for lunch.

Beyond the injuries, he’s quite a cagey sort of guy, but he’s really friendly. He’s also convinced of how lucky he was.

By his own admission, Craig has been through a lot in his life. He’s four years sober after many years of alcoholism and meth addiction. Since he’s been sober, he’s learnt that the highest high he can get is through being fit and working out. He reckons his fitness is what saved him.

“I was out surfing with my friend Jeffrey, and it came up right in between us. It was a three-metre juvenile white. We were paddling out in this weird rip gutter and then I saw it. It was heading towards us slowly, and I turned to Jeffrey and said to paddle, and that there was a shark.

“I looked at the fin and it wasn’t normal – the tip curled back on itself. It glided closer and when I saw the curl of the tail, I knew that this thing wasn’t here to do any good. I was calm and we were paddling back in, but then I saw the fin turn. It wasn’t heading towards us anymore, but I couldn’t see it, so I immediately stopped paddling to try to see where it was.

“That’s when it launched almost six feet into the air; it twisted in the air towards me, and went for me. It knew I was human. He was smiling at me when he was in the air. He was happy. I think it was a game, to him. He was practising for seal season, and I was the target.”

Craig fought the shark off, instructed his mate to tourniquet his arm and leg with their legropes, and woke up three days later in hospital.

He said that he believes sharks kill humans for enjoyment, not food. But he doesn’t believe there is any mistake when they do go for a human – they know what they’re doing. “I wasn’t worried or scared about the sharks down here when the attacks were happening, before mine. I was going to keep surfing every single morning until it happened to me. And then it did.”

He’s since been deeply moved by the outpouring of kindness, generosity and respect from the community. The generosity of the human spirit wasn’t something he was used to, being “a drunk and a drug addict”.

Recovery has taken him from a wheelchair, to a walker, to a crutch, to where he is now, walking badly. He believes it’ll take him two years to get back to health, and to a place where he might dare go in the water. If and when he does, it’ll be in a safe place like the Gold Coast.

Unlike Jabez Reitman, Craig feels the ensuing media circus was good for him; it’s helped him to tell his story and talk about it. Like Jabez, he feels the Bite Club has helped him, too. A friend called him while he was in the hospital and said, Would you like to join the Bite Club? And he said, I think I already have.

The attack seems to have given him deep cause for reflection: “This was the last test from God. The shark. Now that I’ve survived that, it’s done.”

But he’s not overwhelmed by his importance in the bigger scheme of things, either. “My attack doesn’t matter as much. I’m just an ex-junkie. When a kid gets bitten, that’s when things will really start changing.”

In our current print edition we have a large feature on the string of shark attacks the NSW region has been inflicted with this year. We delve into the question… how, why, what and will it stop? Part of that research involved talking to the survivors. You can read another one of those interviews right here. If you want more, or you want the full article, head over to your local newsagency and pick one up, or, order online here.