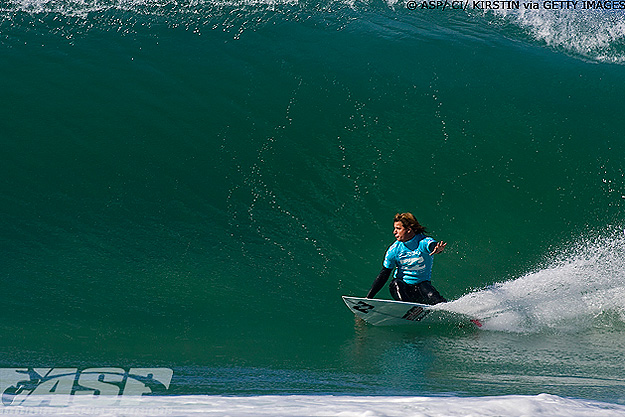 Above: Occy during his glory days on the world tour. Photo: ASP/WSL

Without warning he lurched onto my computer screen, under-bite and nostril flairs and all, Mark Occhilupo, the raging bull himself, and I no longer felt safe. An Aussie icon and international surfing hero to most, to me Occy is a trigger, the harbinger of anxiety. Just to see that iconic visage and to hear the squirrel-voiced platitudes evokes in me feelings of immense worthlessness. I may be alone in Australian surfing, but I no longer idolise Mark Occhilupo, I don’t consider him to be that great a guy, heck, I don’t even like Occy.

It wasn’t always this way. For almost all my life I adored Occy, for either his surfing prowess, or his extracurricular larrikinism, but in my freshman year on the surf-media trail I had a run in with the hall-of-famer that has forever since soured my position. For it was in that year, on the balcony of the Billabong Pipeline house, the 1999 world champion farted in my general direction.

It was the year Mick would win his third world title and I was there to cover it. Fanno’s victory was still up in the air, and the SL brass needed another reason to send us to the North Shore. It just so happened that that year WSL Australasia webcasters, FreshAir Broadcast, wanted to test their new tech, and head honcho, Sam Norwood, had the brilliant idea to broadcast a Pipe freesurf from one of the surf houses’ balconies. A few phone calls later and Billabong decided to come to the party, and Sam and I were on the South Pacific milk route, destination: Oahu via Fiji, Tonga and Samoa.

The idea was to stream live surfing from Da Rock, complete with off-the-cuff commentary by team ‘Bong. I was along to fill the commentary void when the team riders weren’t feeling chatty, conduct some interviews, and provide a Surfing Life presence. Now, I’m an awkward bloke at best, a social deficiency sharply magnified when I’m in front of a camera, but yet I signed up for it because how hard can it be? Most surfers seemed like decent people, and they’re pretty comfortable with the camera. Just hold the microphone and hang on for the ride, piece of poke, right?

Turns out that pro surfers don’t much want to be interviewed after a gruelling session out at Pipe, Backdoor, or Off The Wall, and will quickly disappear when you make the request, miraculously never to be seen again, even though we were in their house. Without the clout to implore anyone to do anything, we set up the cameras and started the live stream as the swell really filled in, and then Occy came up through the backyard and showered off, and grabbed himself a post-surf snack.

In all of our correspondences leading up to the live stream, Billabong slated Occy as being the guy who would essentially co-host the live stream. He had proven on WSL webcasts to be quite the personality, full of knowledge and anecdotes, a loveable surfing legend who would be the ideal partner in a round of beers and shit talking, seemingly ideally suited to this particular project.

We approached Occy, accompanied by a ’Bong team wrangler for extra authority, and he seemed reluctant, but resigned, to joining us on the deck. Occy wasn’t the same as the other Billabong riders, he wasn’t in Hawaii to compete, and his value to the brand wasn’t necessarily in his freesurfing; he’s a personality that gives ’Bong some of the cred it needs to peddle wares to the core surf market – essentially it was his job to be on camera with us. Shoot some shit, spruik the brand, that kinda thing, and it gave me quite a little buzz; this was the Mark Occhilupo, and I was going to talk to him, live, beamed across the world, about all things surfing and Hawaii and Pipeline and world titles. I figured that by the end of it we’d almost be mates.

Fuck me sideways I was wrong.

I could tell that Occy didn’t want to be there when he arrived. I wasn’t someone he knew, I wasn’t one of “the boys”, I wasn’t a respected journalist, or media personality, and I didn’t compensate for any of those deficiencies with any discernible charisma or interviewing skill. To be honest, I’m generally a pretty uncomfortable bloke to be around, and being around a bloke I thought to be a living legend didn’t alleviate that at all. Occy took his time in sitting down, and then asked How are we were going to do this?

I suggested that we could just chat, shoot the breeze, that he could chat to some of his crew, maybe take the reigns a bit, you know?

Nah, you just ask me questions and I’ll answer them.

So I did, and I tried, and Occy gave me short, media-polished answers to my questions and then let deafening silences take over until I’d conjure up another question. It was uncomfortable; I was unprepared and well below confident. I figured Occy would take the reigns, that there’d be some banter between us, but there was nothing of the sort, just my questions, his answers, and an overwhelming vibe that he wanted to be out of there. At one point he just got up to grab a beer and took his time coming back, leaving me just sitting there marinating in my own discomfort, in front of a camera being beamed live around the world, but he came back, and I thought of new, apparently underwhelming, lines of questioning.

Occy’s utter disdain for me was made apparent when I asked what seemed to me like another innocuous question. Instead of answering, and I don’t know if it was specifically aimed at me, Occy cocked his leg slightly and directed a large loud fart in my general direction. To me the intention was clear, my very existence on planet earth was barely worth one of Occy’s cheese squeezes, and while he and his friends on the deck found it hilarious, I was internally furious. Here I was, just a young fella in the big scary world trying to have a go of it, and an Aussie icon – a hero of mine – had deemed me to be of such an inferior quality that he knew he could just drop his guts on me and it’d be a lark.

And admittedly it was, in retrospect. At the time I was mortified, embarrassed, and disappointed in Mark, but given time to cool off, how could I expect any less. Occy’s been one of “the guys” in world surfing for a while now, doted over since he was a grom, led to believe that he doesn’t have to stoop below a certain level in his career, and in his opinion I was below that level. As such, farting at me was fucking hilarious, even if I didn’t find it to be so at the time, a true Aussie insult, a way to put me in my place, that place being somewhere among the old wax scrapings. I saw him a few times since and he never gave the impression that he remembered me, but I sure remember him – I remember the tone, the slight sickly sweet smell, oh I remember Occy – and when I try and forget about him he just pops up again on the WSL broadcast to remind me of just how worthless I really am.