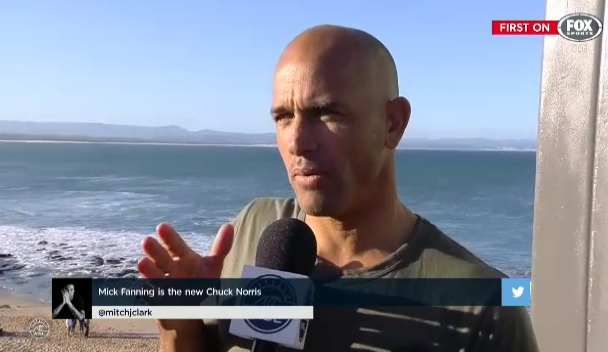 The following is a transcription from a Fox Sports interview.

“I was coming up the beach and there were a bunch of kids saying, ah, sign this, and that stuff – but then I saw all the boats and skis go straight to the lineup and I knew there was only one possible reason that would ever happen, ever, in a contest. And I just ran up the beach saying What happened! Trying to find some information. And then they played it on the screen and I saw it and I was halfway through crying and laughing. He got so lucky, and he’s getting looked after.

“I’m sort of lost for words to be honest. Life is a lot more important than a surf contest, and I don’t think Mick’s too worried if he gets second place right now. All of us almost watched our friend get eaten by a shark.

“I’m just blown away that there’s no damage at all. He said he punched it a couple of times, he doesn’t have a scar or scratch, he’s not bleeding or anything – there’s no luckier situation you could have. You’d probably say this is the most well documented shark attack ever.

“But, I’m not quite sure if it was an attack, or what. It sorta looks like, on the video, that maybe the shark was swimming out and got his face caught in the leash, and it was sorta thrashing around. But then after that, it was probably interested, saying what is this thing here?

“Today I probably thought about it 30 times, ten times in each heat – I’m just sittin’ out here, there’s no one around, and if a shark is around it’s only going to hear or see me.

“And now we know, it’s a big shark. It’s way bigger than Mick. It’s multiples of his weight and it’s such a huge event. Think of 20 years from now, you know, we look back and say where were you when that happened!?

“I’m just so relieved that nothing happened to Mick. I think it’s starting to hit me now.”

Read our journalist’s vivid account (and full photo journal) of the event, from the ground, before, during and after the event.