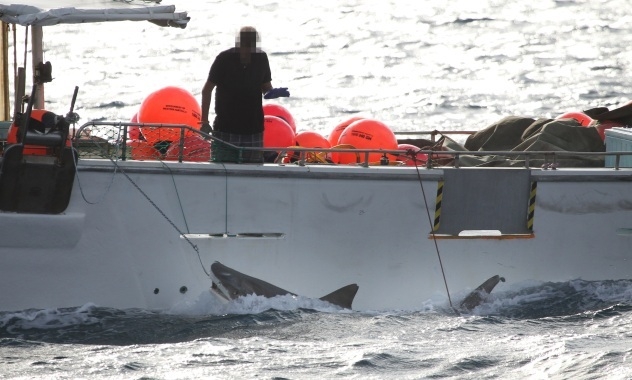 What’d you do on the morning of Australia Day? Early morning surf followed by an ice-cold bevvie? Sounds pretty pleasant… Unfortunately, things weren’t quite so peachy over in the waters of Western Australia.

Early on the morning of Sunday the 26th, fishermen hired by Premier Colin Barnett went out to sea where they found a three-metre female tiger shark, pregnant, with a hook through her mouth off one of their drum lines. They shot her in the head four times before she started to die. This was the first episode of the Shark Cull Program.

To clarify what’s going on in our waters, we rang up our ol’ pal Senator Peter Whish-Wilson. You know, the one who supported our rant against the Kirra Cruise Terminal. He’s got a bit of insight that you might not want to hear. Ignorance ain’t always bliss, folks. The first victim of the cull… Photo: Yahoo News

There’s been a couple of things going on. You have to start from the beginning and look at the increase in frequency of shark attacks in WA, particularly in small areas. Look at that and say, well, there’s been such an increase that it’s not occurring by chance. The probability of a spike like this happening naturally, there’s not a chance. Something is happening, and it’s not going to go back to normal again.

A lot of people are saying, more people, more attacks. Could this be true?

No. If you look at the attacks and the dates of the attacks, they’re in the more remote areas (down in the southwest) and not during the summer when you’ve got the most people in the water. Surfers, of course, are a high fatality bunch. I grew up surfing there and have been surfing there the last 30 years, and have never thought about being attacked. It’s not the increase of numbers of people, although no one can prove that because there haven’t been any studies to know.

Why isn’t the government forced to do studies before they instigate something this radical?

It’s political ass covering. If there are more deaths, they don’t want to get the blame laid at their feet. They’re being hairy chested and trying to show that they’re taking strong action. They’re taking the easiest option… just go out and kill them. The sensible thing to do would be to conduct a study as to why there’s been such an increase in frequency in shark attacks. That would be looking at things such as population levels of Great Whites, their movements, why they tend to converge in certain areas during certain times of the year, and most importantly what’s going on with their food source.

Where my home is in the east coast of Tassie, it’s a fishing village, but there’s only about four fishing boats left. You speak to the fisherman there and they all say “There’s no more fish”. You really wonder what’s going on in some coastal areas. So the one thing I’ve been focused on and have asked questions about has been the shark tracking program, although the senator in charge hasn’t been forthcoming as to what’s going on.

You see, they’re tracking lots of sharks, including a large percentage of great whites. The key to understanding them is to spend more money on research, particularly on this program. I got alarmed last year when I was in WA and spoke to the mayor of a coastal town, who told me that the tracking program was going to be used to track the sharks and cull them. I thought, you’ve got to be kidding. That’s meant for scientific research. And he said no. He said he’d heard whispers that if they knew where the sharks were, through the tracking devices, that they’d find them and kill them. What they’re now doing is supposedly a random baiting program, but these tracking devices provide a lot of information for them on where they go, what time of year they go, their ages, all that data… That data that we should be using to understand them. I mean, people are free diving with them now! It’s incredible, and we know nothing about it. Over the weekend, hundreds gathered on beaches around Australia, protesting Barnett and the cull. Photo: SMH

What sort of effects will the cull have, short and long term?

Top predators in any ecosystem are critical to keeping environments in balance. When we get large sharks culled, we expect to see an increase in number of smaller fish species and stingrays, and they feed on the smaller species that are commercially valuable fish. Then we see massive impacts in the ecosystem. I hate to use these words because they’re so harsh, but even from a cost benefit analysis it’s not going to be good for the fisheries, let alone the environmental aspects of it.

You screw with the whole ecosystem when you get rid of the top predator, and that’s a key issue. Not to mention the fact that these species have been endangered because they’ve been hunted, and we know so little about them. And it’s not just white sharks – it’s tiger sharks, anything. Any shark over 3 metres will be killed.

Do you think it’s going to have an effect on the number of attacks?

It could actually attract more sharks. If we go out putting drum baits in the ocean, it’s obviously going to attract more sharks. So you’re bringing sharks into the area that might not have come in the first place, then you’re going to kill them, then you’re going to end up bragging about how many you’ve killed. They smell blood, they’re likely to come, but would they have otherwise?

So they’re attracting and killing more sharks, rather than tracking them and making sure they aren’t near the beaches…

I’ve been trying to get answers about this. I mean, what happens if one of the sharks that they catch is one that’s being tracked? Is someone monitoring these sharks and making sure they aren’t in the area of the cull? It hasn’t been studied, and it raises questions.

We need to spend a lot more money on shark research rather than killing them. Scientists at the tracking program have informally used the data they have to call surf lifesavers and surf competitions and warn them that there’s a great white in the vicinity. I mean, a guy in California has created an app on people’s phones that shows where the tagged sharks are, so people can then make the choice if they want to go swimming or surfing. The question it raises with the government is, will people continue to go to the beaches and spend money if they check their phones and see that there’s a shark off the coast, when that shark might be perfectly harmless. But on the flip side, not every shark has been tagged, and people might get a false sense of security.

How would you confront the attack problem?

Loss of human life is a challenge, and a big one at that. But I think with human ingenuity and intelligence we can overcome these things. That includes public education and looking at other types of strategies. What they could be doing, and I know some scientists have suggested this, is to catch the sharks and tag them and dump them out in the exclusion zone, which is deep and far away. That’s been proven in other places to work really effectively. Seems out of place, doesn’t it?

So why haven’t they gone to that first?

Wow. I’m so tempted to say something pretty horrible about our politicians right now. But honestly, it’s because they’re looking at it from a cost point of view. Contract someone to find and kill them, which is a lot easier than conducting a program of catching a shark and tagging it, then towing it out to see. But the fact of it is, you can’t put a cost on human life, and nothing should bee too expensive to save a human life. And on top of that it’ll give us a long-term understanding of the species. We’ve now hunted so many species to extinction, across so many ecosystems, that we can’t afford to do that to another.

One politician, in one state, has decided that he’s going to be a strong man and kill sharks. And they’re not even his, they’re in Australian waters and they belong to everyone.

Is the culling process humane?

They put drums with ugly hooks covered in bait, and then once they’ve actually hooked a shark they reel it up to the surface and shoot it in the head. On Australia Day they caught their first victim, which was a three-metre female tiger shark, who was pregnant. They had to shoot it four times. It’s a pretty cruel, barbaric way to kill any creature. It took hours for that shark to die.

What can we do?

There’s going to be a series of national rallies to let the government know that this isn’t ok. We’re going to look to national levels of protection for the species. They’ve taken this action because they view it as a political advantage, and we need to let them know that it’s not.

Once they’ve taken this type of action it’s going to be hard for them to back down. If shark attacks continue, they’re going to use this as a justification and take even further action. That’s how politics works.

Over the next week we’re going to (hopefully) be talking to marine biologists who are experts in sharks and shark behaviour. If we can get our mitts on ‘em, we’ll spend a few hours chatting with the West Australian government which has implemented the shark cull, and ask them just what their goal is.