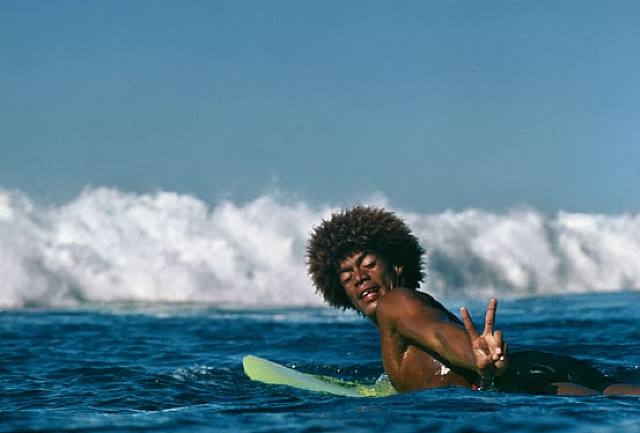 Buttons from ENCYCLOPEDIA of SURFING videos on Vimeo.

It’s quickly becoming a social media cliche, but it’s true: Montgomery “Buttons” Kaluhiokalani was way ahead of his time. His outrageously loose, original and creative small wave ripping in Hawaiian waters through the mid to late 1970s pretty much defied every accepted surfing style of the time. Buttons rode the lines he saw in his bushy Afroed head, sliding cutties into the barrel, 360 slides and carves, insane tuberiding and more. He was Kelly Slater almost before Kelly was born. But Buttons wasn’t the empire building, generation defining type. He inspired his Hawaiian kid colleagues, like Dane Kealoha, Mark Liddell, Tim Carvalho and Louis Ferreira, but he never really aspired to lead them. Competitively he had some spectacular heats and good results, like his third in the epic 1981 Pipe Masters, yet again this wasn’t Buttons’s natural surfing home. For him, that was simply the water, where his surf stoke shone through in pretty much any conditions. Anyone who’s shared a surf with Buttons will have a story about him laughing his way into a set wave, or encouraging someone else to “pu’ insai”. He went through some rough times but came out the other side a proud father and as happy a surfer as ever. Surfing’s lucky to have had him.