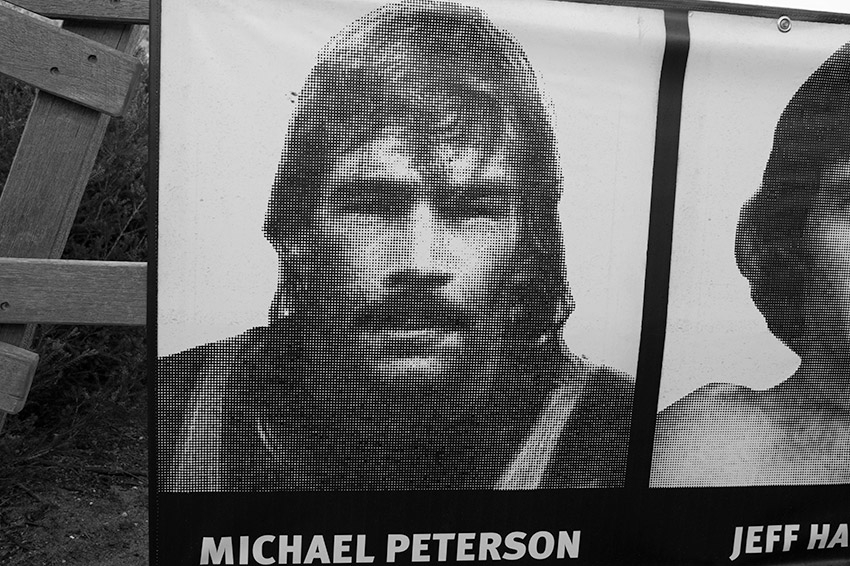 Today marks a year since Michael Peterson died of heart failure at the age of 59. A couple of days ago, his Mum Joan came down to Bells with MP’s ashes. Well not all his ashes. Some were scattered last year at Kirra. The idea was to scatter the remainder in the Bells bowl on Good Friday.

When Joan arrived in Torquay she promptly asked Rip Curl’s Neil Ridgway to take care of them till the scattering. Naturally Ridgway agreed. But then suddenly it dawned on him: Holy Shit, I’ve got MP’s ASHES in my backpack.

What do you DO with MP’s ashes? Neil took ’em home and wondered where the hell he should put ’em. In the garage? Nah, you can’t put MP’s ashes in the garage. Neil ended up leaving them in the backpack at the foot of the marital bed. “What are you doing?” demanded his sceptical wife, Marie. “They’re in there aren’t they?” “It’s only for tonight,” pleaded Ridgway.

This morning he lugged them down to the contest, still in the little black and white checked backpack. The plan — under advisement of the indigenous community — was for Tom Peterson, MP’s surviving brother, to take the ashes out on the back of a jetski and scatter them across the back of the Bowl.

“I might just jump in the water and stomp on them, to make sure he goes down,” Tom told one of the event crew.

Now, with just a few minutes before the ceremony, with a bit of advisory assistance from Neil, Tom works his way into a modern chest zip wetsuit. “Never wear ’em,” he explains. You don’t need to in Queensland, mostly.

Tom puts a T-shirt from the MP Classic on over the rubber, and strings the black and white bag and its contents on his back. “Finish it,” he says more or less to himself. A poster of MP in his 20s hanging at the event site of the Rip Curl Pro, Bells Beach. Photo: ASP/Robertson

I can’t help but reflect on the oddness of this relationship: the mythic surf hero and his human brother. None of the many photos and posters around the event show Michael in his last few years. He’s fixed in memory now, the enigmatic long haired dark wizard in his 20s, with the deadly look and the killer cutback. Tom, on the other hand, is here. Tom is one of the world’s most weatherbeaten humans, but he has the Peterson genes. He’s kind of indomitable. Plenty, well maybe not plenty, but there’s people who reckon Tommy was a better surfer than Michael. He had a wild, low slung Bertlemann-like attack, but he didn’t have Michael’s literally mad competitive will.

And the booze wore on him. But here he is, while his brother’s ashes are going in the sea.

They finish a couple of junior heats and Tom jumps on the back of a safety ski and they wander out to Rincon. Then the ski trawls slowly across the Bowl, Tom on the back, waving the container of ashes above his head like he’s celebrating a victory. The mid morning crowd aren’t totally sure what to make of it. They lean forward out of the grandstands, suddenly aware of this strangely sacred moment.

Tom jumps off the ski and comes back up to get changed, visibly happy. Maybe relieved? “We’ll, that’s that,” he says.

The Surfing Life “Brothers” issue is on sale for one more week, find where you can grab a copy for yourself, here.