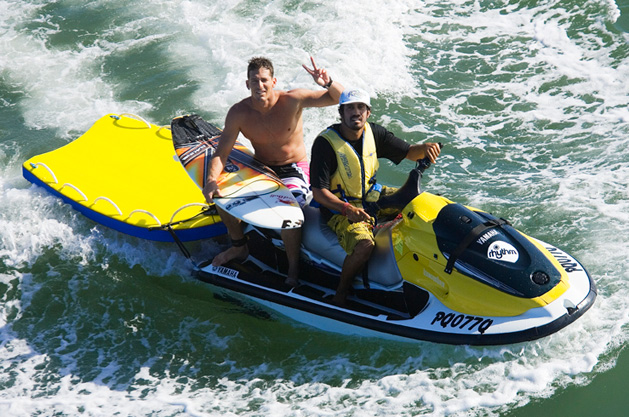 According to sources close to Andy, AI was en route to his home in Hawaii following the onset of a bout of dengue fever in Puerto Rico, where he was competing in the Rip Curl Search event.

He flew first to Miami, where he spent two days on an IV drip, but insisted on heading home to see his regular doctor. Andy then became sicker and was unable to make a connecting flight to Hawaii out of Dallas. He checked into a hotel to rest, but was found dead by hotel staff in the morning. He was 32 years old.

Andy’s wife Lyndie is due to give birth to their child within a month. Andy Irons was an extrovert at heart. In his finest hours, he overflowed with almost impossible positive energy. Nothing seemed beyond his grasp. As his great tour buddy Joel Parkinson put it, just before AI proved him correct by winning the Showdown final at Pipeine in 2003: “Andy makes it happen.”

Andy was the elder son of Phil and Danielle Irons. Phil, a keen surfer from Torrance Beach in California, moved to Kauai in the early 1970s to chase the tropical dream. The couple had a second son, Bruce, split, then reconnected as their sons went on to forge massive pro surfing careers.

Phil tried to get Andy into surfing at the age of four, but according to AI: “It just scared…the…SHIT out of us! He would put us on boards and push us into the shorebreak and we were getting throttled. Oh! I hated him for it! I was ready to be a mountain climber or something. Just in spite of him. I hated the ocean! I didn’t like the beach at all. Well, I liked playing on the sand.”

It took a cousin, Jason, get him interested in the idea. “He was four or five years older than me. I’d go to the beach and watch him surf. I’d watch what he was doing on the waves, and the waves looked so fun… I was scared of the ocean then, but as I got older me and my brother surfed and got comfortable with it.”

While Bruce seemed constrained and irritated by competition, Andy took to it like the born athlete he was. At 17, against even his own expectations, he won a pro-am event at Pipeline. The way he recalled this win years later seems to sum up his general attitude: “I was making heats, I was going ‘Hey this is incredible! I can’t believe it!!’ I was feeling like Superman or something. Just … buzzing! I remember going back to high school being soooo stoked, all my friends, chicks are coming up going ‘Yes, you’re good, huh? You won the contest!’ I was like whooo…! How’s all this hype! I was pretty stoked. I thought this is what I wanna do, and I’m doing it. Bring me the pros!”

Andy qualified for the ASP WCT in 1998, but it was a bit too much for the Kauai kid. He fumbled too many heats, partied too hard, and was off the main tour again by the end of 1999.

It was a wake-up call he needed. AI did the hard yards, requalified in record time, and by late 2001 was 10th in the world. Then his world championship run kicked.

From 2002 to 2004, he dominated all the competition, including – memorably – Kelly Slater, who couldn’t find an answer to AI’s sheer animal attack in that 2003 Pipe final. Later he described his competitive instinct to ASL: “I use it when it’s there. I don’t really control it. It’s something, I don’t know what, it’s deep down, it’s DNA, in my structure, my being, the way I am. It’s almost a fury, like a rage, and I think that’s one of the deepest emotions you can have. It definitely pushes everything about me. When I need it, and when I don’t need it sometimes.”

That rage was balanced by a superbly varied range of moves, an unmatched physical presence on the wave, and an astounding mix of air sense and barrel mastery. Brother Bruce summed it up as well as anyone when he said: “If aliens came down to Earth and wanted to clone a perfect surfer, they’d look at him.”

It was a brilliant three years but it took a major toll. In 2005, AI watched as Slater came back to full form, and took a step away from his own 100% in response. In ’06 he came out swinging, but with disappointing results.

This was the other side of the positive AI vibe, a black negativity to which he was prey: “If I’m losing I’ll think the whole world is against me. Every single person in it. Everyone’s against me and everyone wants me to lose. It’s like it’s a big conspiracy, like literally a huge conspiracy.”

In recent years he’d learned how to cope with the conspiracy theory spiral, thanks mainly to his wife Lyndie: “She talks me off the cliff. Off the bridge. Off everything. Without her it would fall apart, the wheels, everything. I’d fly off the tracks.”

His surfing continued to blossom in off-tour trips for various surf movies, and a year off in 2009 seemed to help him re-set the balance he’d missed after coming off the world title high.

For a surfer who thrived on stardom, Andy was very much one of the boys. There was nothing he liked more about winning than sharing the stoke with friends. He thought the world of Occy, and constantly relied on his mates, both in Hawaii and Australia, to keep his feet on the ground. “Your friends always keep you down to earth,” he told ASL. “They’re the best. Once you start thinking you’re above them then they’re gonna call you a dickhead, you know, ‘You’re messing up! You’re big headed.’ They’ll get you out of that real quick. Better than anyone else.”

He spent much of this year training on the Gold Coast with Parko, Luke Egan and Wes Berg, and came back to his super-positive best to win the Billabong Pro in Tahiti two months ago. He was very much looking forward to the birth of his first child with Lyndie, who is due late this month.

Andy is survived by Lyndie, Bruce, and Phil and Danielle.

Click here for report from the reaction at the Rip Curl Pro Puerto Rico.