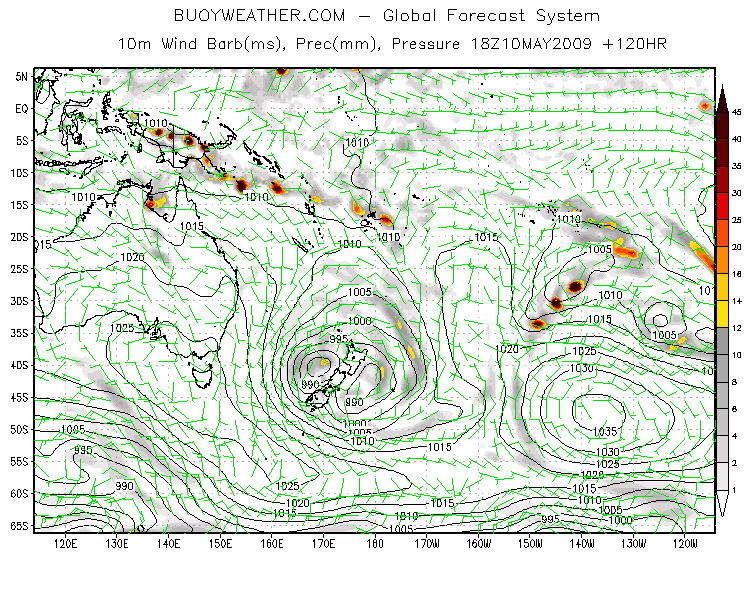 Not going anywhere but up (north that is)

Here we are within five days of Touchdown, and the whole combo is still flaring away out there in Forecast Land. Big pressure gradient, high over Tassie, low on top of NZ, wind to buggery and back.

But can we just take a quick breath now and have a think about it.

I would like also to issue a Weather Nerd Alert here because we’re about to discuss boring ol’ reality.

This map’s for Sunday, May 10. But has it dawned on anyone that there’s about 1000 k’s between the front edge of the gale and the NSW coast? Yeah, one thousand kilometres.

You can’t drive that in a car along the Pacific Highway in under 10 hours. So how can a swell cover that much ground in no time at all

Short answer is that it can’t. If this map hits the mark, the swell created by that wind band will not be hitting the coast on May 10, but around 36 hours later.

Here’s the deal with how swells travel. They’re formed and organised by the fetch. They then travel in big rolling groups of separate swells, called “swell trains”. Separate swell waves are constantly cycling and recycling through the train. Each swell train runs its own race and arrives at a given point in its comfy little group. (That’s why you get sets and lulls!)

But the overall mass of swell has a top speed, pretty much based on the amount of energy shoved into it by the fetch. It moves fastest in the open ocean, but begins to slow as it feels bottom. (A big arse groundswell like this one will begin feeling bottom as far out to sea as the edge of the continental shelf.)

We almost never get to ride waves off swells that’re moving at open ocean pace. Like a really solid long interval swell wave might be moving offshore at over 30 knots. But by the time it’s been dragged across the shallows of the shelf and outer reefs and so on, it’s usually doing about half that.

This swell, out to sea, is gonna be travelling a bit less than that 30 knot hyperspeed, but nonetheless, every day it’s gonna be covering about 800 kilometres. So, yeah, around a day and half to Touchdown.

Remember this when you look at these mad storms and wonder why it’s not 20 feet if the weather map’s flaring – ‘cause maybe, in a coupla days time, it WILL be.

And if ya want to get the best out of this event, I’d take Tuesday morning off.