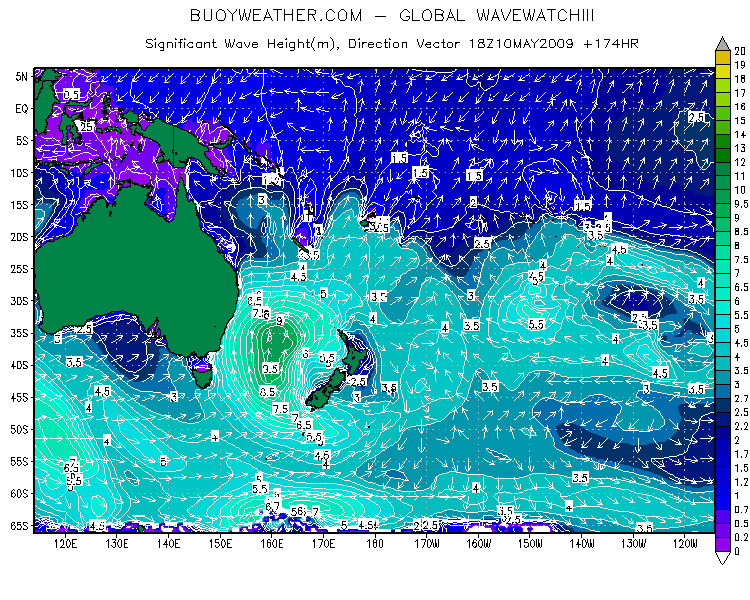 With less than a week till Our Magic Day, the forecast chart is growing more and more certain of itself. Strong low in the eastern Tasman Sea, strong high over Vicco-Tassie.

You might notice the surface pressure chart looks a bit different today – the pressure gradient doesn’t look as gnarly. There seems to be less lines involved. Well, that’s because for whatever reason the computer is only drawing lines that mark every five units of air pressure, instead of a line for every single unit. Stick five times as many lines on this map and you’d have a fucken nuclear explosion – which sorta seems like what’s about to happen come May 10 in the near Pacific.

To show ya the likely effects on the surf, today we’ve included a Wave Height forecast map. This shows the predicted size and direction of the dominant swell in the water, and right now it says this storm will be generating a nine and a half metre southerly groundswell in the centre of that southerly fetch come May 10. That’s a BIG FUCKEN GROUNDSWELL everyone.

It also suggests that around six and a half metres of the swell will be making contact with the NSW central and north coast that day. The rest of it’s gonna be rocketing off toward Fiji, New Caledonia and the Solomon Islands.

Now you can see how crazy surf trips are planned ahead of time. BUT. There’s still a but. This is still just a forecast. Again we at ASL throw down the challenge. How big do YOU reckon this swell’s gonna be? Would you roll the dice with a couple of thousand dollars based on this information? And if so, where the hell would you go?