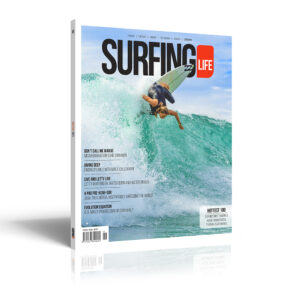 This article first appeared in Surfing Life #360 – SURFERS ’21 (starting on p. 16). To read more like this, buy the issue or subscribe.

IS IT ABOUT PROGRESSION OR SURVIVAL?

Progression encompasses many aspects of the surfing world, from explosive aerials to gender equality. Since its Polynesian origins and the days of riding 40 kilo planks of wood, surfing has undergone major transformations. This evolution has been driven by a human desire to be better or for some surfers, to be the best. Yet as tempting as it may be to explore new avenues of forward trajectory, progress does not always come without its trade-offs.

The genesis of the thruster is a prime example of a surfer: Simon Anderson creating the solution to his surfing problems. The year that Anderson debuted his tri-finned masterpiece on the world stage he went on to win the iconic Bells Beach Rip Curl Pro and the Pipeline Masters. Within the next two years almost every surfer on Tour (and in the world) had three fins in their board instead of one or two. From fins to watches to wave pools, the surfing community’s innovators continue to stretch the boundaries further each year and we reap the benefits.

In a COVID-ridden world, professional surfing risks stagnation. In what was perhaps an attempt to avoid the fate of many gyms, restaurants, and hairdressers, the WSL has changed the Championship Tour format for 2022. The great white shark must always keep moving forward to pass oxygen through its gills and so, too, must surfing. Not only must surfers’ boards remain in motion to stay afloat beneath their feet, but the entire surfing industry lives and breathes momentum. Will the ’CT changes help surfing move forward, and if not, what’s the point?

In 2022, the women’s and men’s Tour will have a combined schedule with an equal number of events for the first time in history. It’s these kinds of changes that have contributed to the immense progression of women’s surfing over the last few years. With 19-year-old Caroline Marks (finishing sixth on the 2021 WCT) leading the way for the next generation of gravity-defying female surfers, there is certainly hope for this propulsion to continue.

The Pipe Masters will serve another year at the start of the ’CT season in 2022. Surfing’s beating heart, a place where the boundaries of possibility have been demolished, has lost its position as the world title decider. At the time of writing, the most deadly break on planet Earth will be replaced by the WSL Final Five format at a “yet to be announced” location. What break could rival the weight Pipeline carries? As we saw this year, what the finals at Lowers lacked in waves of consequence, it made up for in predictability. Carissa and Gabriel entered the finals ranked number one and came out as world champions. Our intention is not to detract from Moore and Medina’s remarkable achievements, as winning a world title is never an easy feat. Our concern is the diminished excitement of the unknown. Could this momentous day disintegrate into the abyss of surfing history?

Among the ’CT format changes, the midyear cut-off will make a return. After the first five events of the season, the Tour will be cut in half and only the top competitors will continue on the ’CT for the rest of the year. This will allow for contests to be run in the best conditions and give surfers who didn’t make the cut an opportunity to requalify on the Challenger Series. However, it takes away the chance of ’CT redemption for those who had a rocky start. Redemption stories take time. Jack Robinson (who finished 2021 ranked 12th) went into Mexico ranked 26th. If the midyear cut had been implemented, this rookie wouldn’t have found his footing to take out the last event of the year. The big upsets are what make the sport exciting. Sure, the upper echelon who make the cut would be the most consistent and “best” competitive surfers, but would the ’CT veterans be pushed to their limits without an arsenal of locked-and-loaded young guns desperate to make their mark? And without their limits being pushed, could the elite lose the motivation to refine their technique, strategy, and equipment to the degree required to maintain the development of the sport?

Not everyone’s favourite surfers will make the cut-off, and they definitely won’t all be in the Final Five. Why do we watch WSL events? To improve our surfing or to be inspired, perhaps. But more than anything we watch competitive surfing for the rivalries, the patriotism, the backstories, the underdogs, and the elements of surprise. Is a mass loss of interest in the ’CT imminent with these changes, or is this the revamp professional surfing needs?

Progression requires things that are new and never been done before; the midyear cut—a tried, tested, and failed format—hardly seems like the right move to do so. However, the pre-emptive fixing of a format—that was not yet broken—may serve as inspiration for surfers, shapers, and everyone else involved in improving the sport.

Evolution does not always run in a straight line. It branches off and it circles back. Whilst the primitive shark must swim forward, the dolphin (whose evolution has taken more complicated turns) may swim in any direction it pleases. With lungs to hold its breath, the dolphin has the freedom to experiment with techniques that may or may not be beneficial for its survival.

Although it sometimes seems otherwise, humans are theoretically even smarter than dolphins. Let’s hope the WCT changes are the right decisions to keep professional surfing alive. If dolphins can keep surfing in this chaotic world, surely the pros on Tour can too.